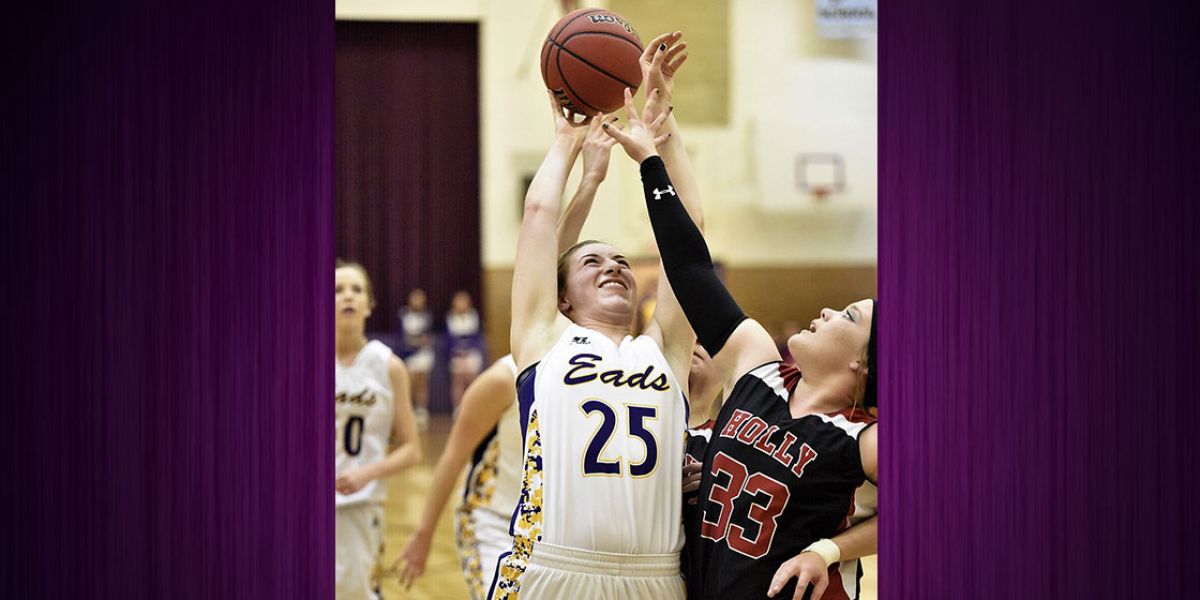 Eads and Holly Girls Clash on the Hi-Plains

The Eads Lady Eagles put together some good, really good, basketball over the weekend as they faced two tough teams and gave both everything they wanted. 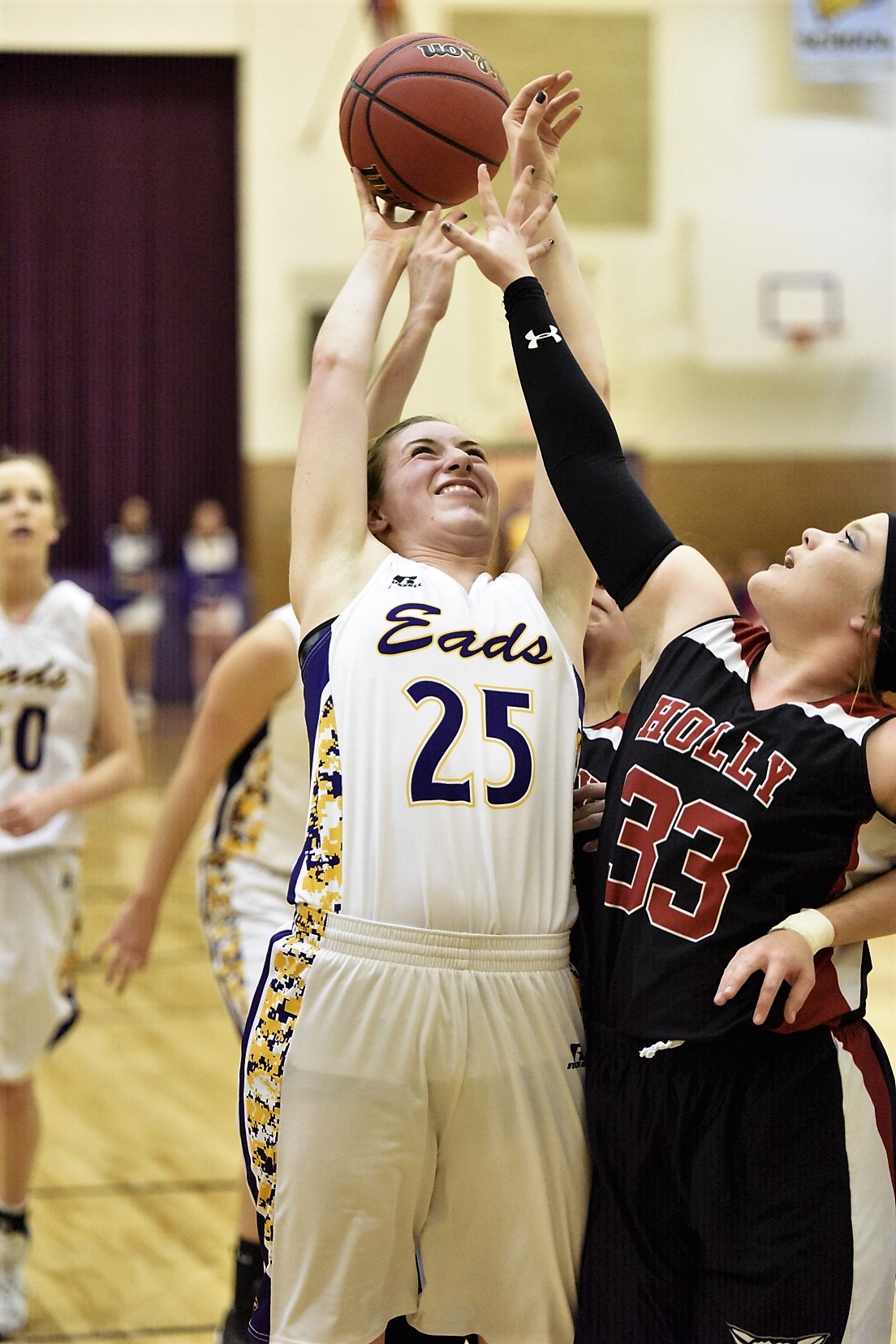 On Friday night the #1 team in the state, the undefeated Kit Carson Lady Wildcats, used their superior size to finally pull away from Eads in the fourth quarter getting the Hi-Plains conference win, 48-27.  Eads then hosted the Lady Wildcats from Holly who had beaten a tough Wiley group the night before and have been on a roll for a number of games.  It looked like the Lady Eagles would not be able to overcome a dismal 13-3 first quarter start, but they used a strong fourth quarter to get the advantage, 45-39.  The Holly win represents a huge moral boost for Eads as they enter into the final two weekends of the regular season.

Neighbors just to the north, Kit Carson, is a team that has size, ball-handlers, and shooters.  They have a fine senior leader in Shayla Bogenhagen who has started for most, if not all, of her preps career as a sharp-shooting 3-point expert.  This year she takes on the role as leader and on Friday night had an exceptional game coming through when Eads began to rattle the windows a bit.  Besides Bogenhagen, who is 5’5, the Lady Wildcats have the luxury of starting a four-person line up all over 6’…very unusual for any girls’ team whether it be 1A or 5A. 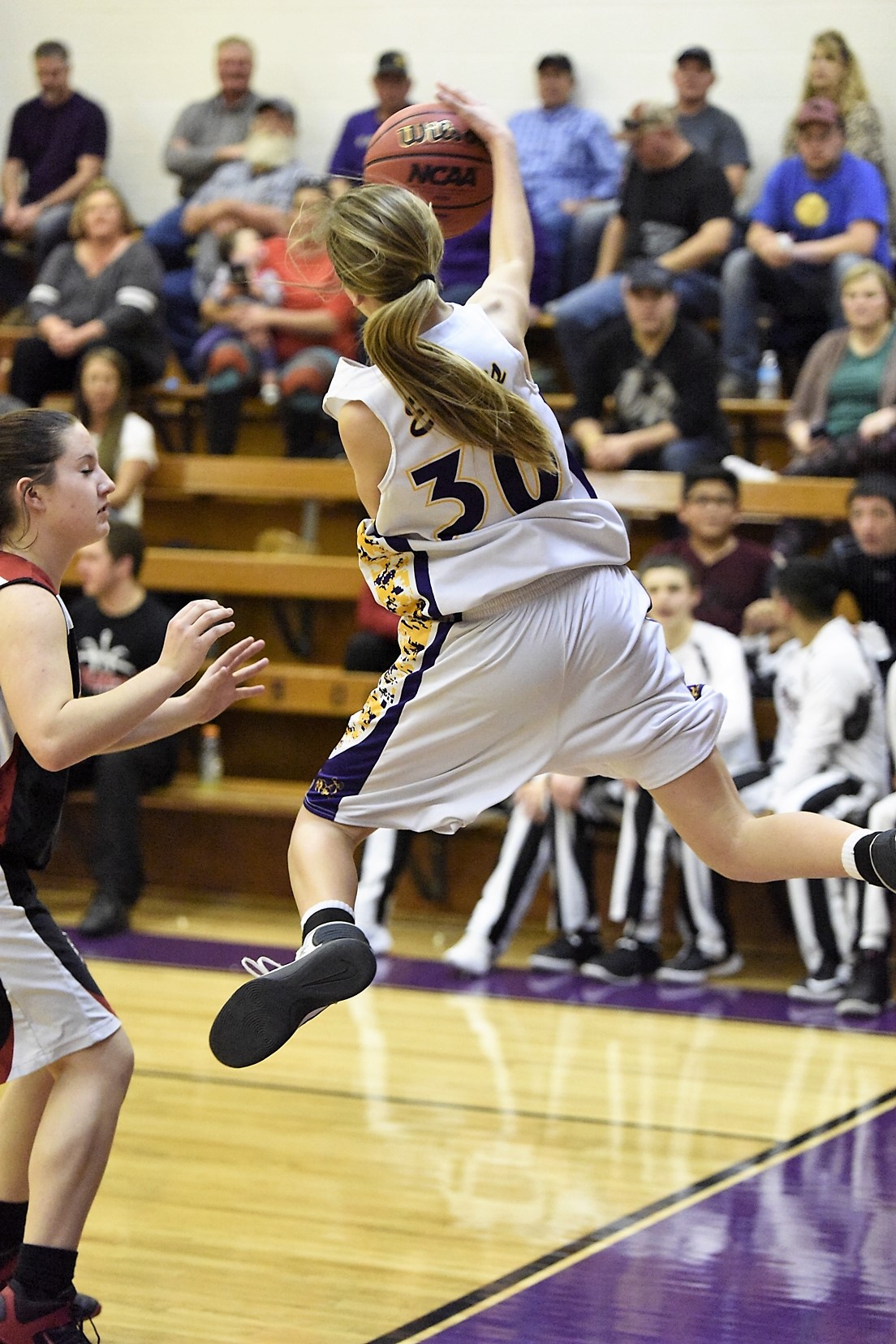 On Friday night in Eads, however, the Kit Carson group had all they could handle for much of the game as Eads’ post, Mariah Smith, put in a phenomenal game and represented a huge presence that could somewhat match up with Carson’s big line.  It would be a terrible start for Eads that put them in a hole they could never quite overcome as the first period saw the Cats take a 11-5 lead.  Brenna Rouse started the game with a three-ball but that would be her only production on the night as the Cat defense found her and controlled the hot shot.  The other bucket came off a nice layup by Hadlie Rittgers.  Bogenhagen would hit a three ball in the first stanza, one of three on the night, while the Wildcat’s leading scorer, Tess Hornung, added a couple of buckets.  Smith then took over the offense for Eads as in the second quarter she would have all of Eads’ points with 10.  For that quarter the Wildcats could not find a solution for the 6’0 junior post.  But Carson would do a little better bringing in 14 points in the second stanza with Mikayla Isenbart, the oldest of the three Isenbart sisters currently starting on the team, scoring a long ball and going 4-for-5 from the charity line.  At halftime the Wildcats led by ten, 25-15.  Eads continued to battle in the second half but by the fourth quarter were out-manned.

Smith led Eads with 16 points and 7 rebounds, and went an excellent 4-for-5 from the charity line. Miranda Mitched chipped in 6 points.  Eads only had 19 total team rebounds against the much taller and physical Wildcats.  Hornung duplicated Smith’s tally with 16 points, while Bogenhagen put in 11 more. 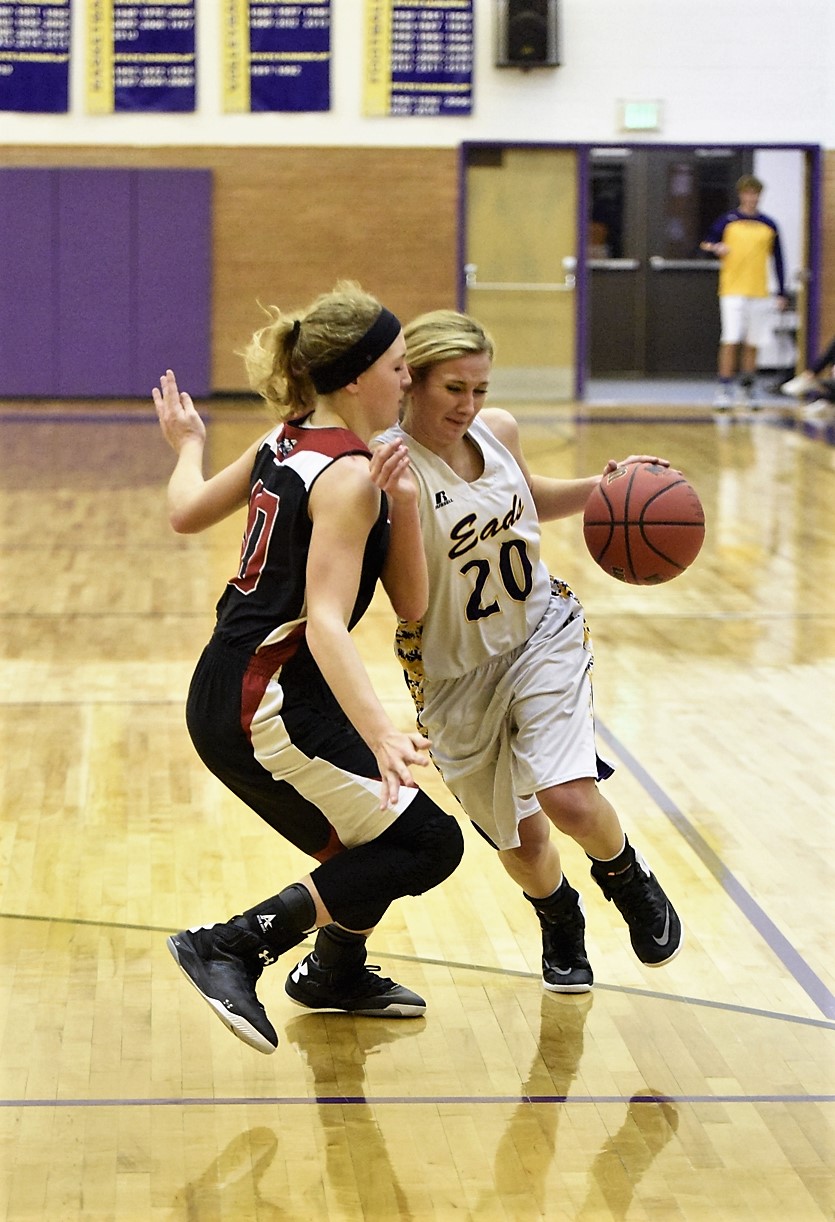 Not deterred after their loss to the Kit Carson crew, Eads went back to work on Saturday night against a very good Holly team.  Again, it was a slow…very slow first quarter for Eads who dug a deep hole that took the entire game to crawl out of as they trailed after one, 13-3.  However, going into the second period Eads picked up their hustle defense and the two sophomore guards, Mitchek and Kaylee Wilson, picked up their offensive games.  Mitchek was all over the court and drove the hoop three times for lay ups while Smith and Wilson began to have success as well.  Smith was not as hot as she was the night before, with a number of easy shots missed, however, she was an intimidating force inside against the Cats from Holly.  By halftime, Eads had made a little gain, trailing 19-12.  Mitchek continued to fluster the Wildcats with her tough defense and good offensive skills as she would find her team mates for buckets with Eads nearing the gap to just four points after a late three-pointer by Rouse.  Eads was actually just two points down late in the period when Taylor Neugebauer and Mitchek got in a little scuffle that went unobserved by the officials.  Neugebauer added insult to injury hitting three balls on the next two Holly possessions.  Rouse’s three saved the game from getting away from Eads.  Eads was on fire going into the final period as they used a 17-8 performance to seal the win.  Wilson, Mitchek, Smith and Brooklynn Jones all contributed down the stretch.  Holly tried to foul to stop the clock after Eads took the lead for good with less than 2 and half minutes left.  It almost worked as the Eagles went a dismal 2-for-6 down the stretch.  However, Rouse calmly hit two big charity shots in the waning moments to seal the deal.

Mitchek came away with 15 points and 4 rebounds.  The hustling sophomore guard also had 4 steals and 3 assists.  Wilson put in 11 points, while Smith added 7 points and was huge on the boards with 13.  As a team Eads had 25 boards, a stat that was key to their win.  Holly’s Josie Cook was a force for the Wildcats.  She would foul out late in the fourth quarter, but not before scoring 11 points.  Neugebauer and Kallie Cathcart each added 9 points for Holly.

The Eads JV girls were happy to get a rare game against Holly JV on Saturday night.  Eads would defeat the Wildcat JV, 31-15, with sophomore Emily Gyurman leading the way for the Eagles with 10 points.  Kaycee Ellenberger added 9 counters, while Lauren Brown and Morgyn Johnson chipped in 5 apiece.

The Lady Eagles, now 10-6, will travel way down south to Pritchett for a Thursday night game against South Baca.  The Lady Patriots are coming off a huge win over the undefeated Kim/Branson team and will be one of the regional contenders come March.  Coach Trey Eder is anxious to see what his young Eagles, with nary a senior on the team, can do against a quality team such as South Baca.