Eads Eagles Gear Up For Districts Seeded Second Behind Holly

With the weather continuing to cause havoc this week for the area baseball teams, Eads managed to get in three important varsity contests and a JV game among the multiple days of cold, drizzle, and wind.  Before the snow flew on Friday evening Eads had defeated Manzanola in two straight games, 12-0, and 9-4; but danced around the Holly game with neither team showing any of their arsenal, losing, 11-8.  The final showdown victory for Holly put them in sole possession of the district championship and will seed them as top dog in this week’s District Tournament.  Eads is right behind the Wildcats in the #2 spot.

Senior Stephen Wilson took the mound in the first game against Manzanola on Monday and enjoyed a 5 inning outing that ended in a shut out win for the lefty.  Wilson gave up only 2 hits and no runs, striking out 8 batters.  His record currently stands at 5-0 with a 1.14 ERA. 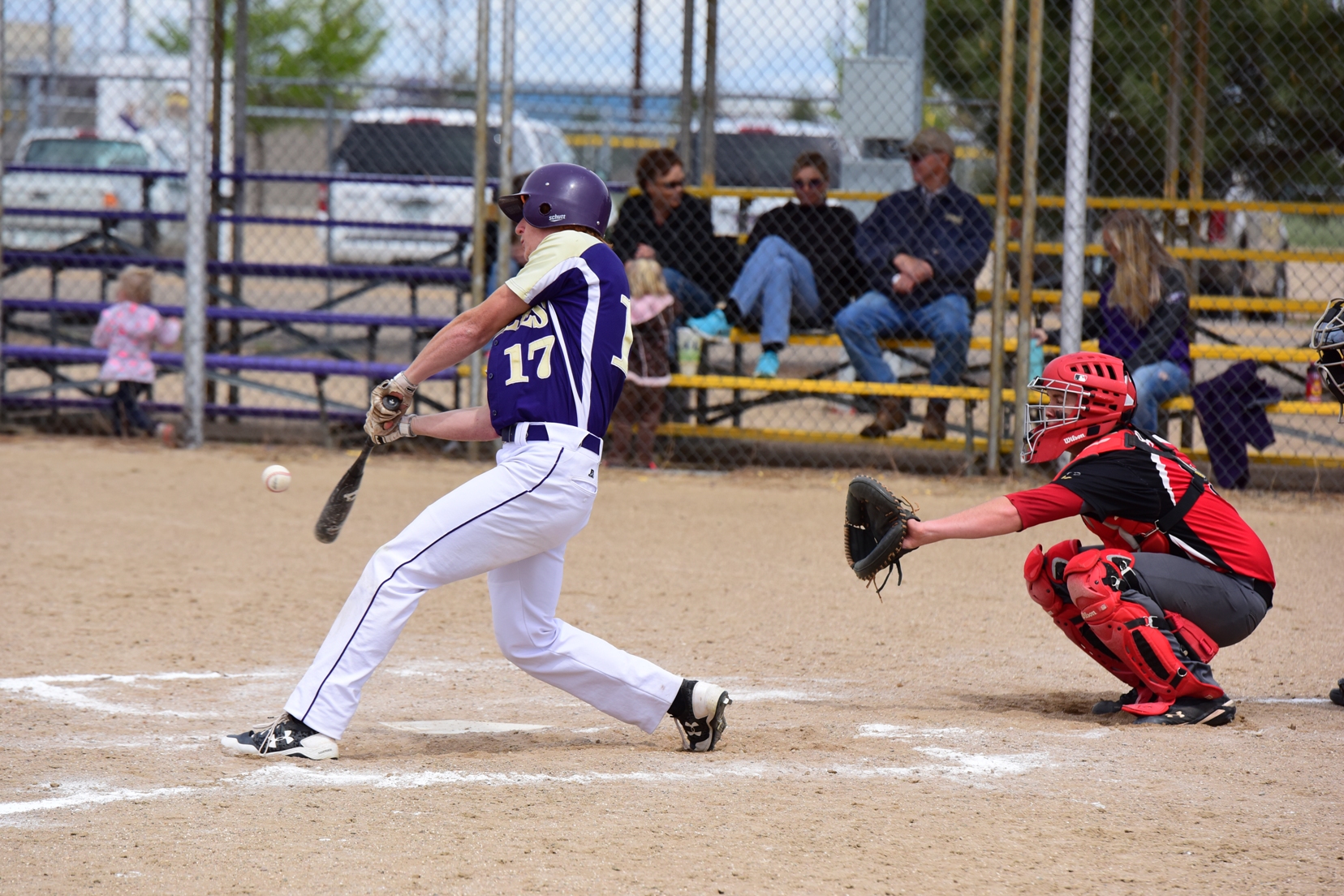 While Wilson controlled the bats for Manzy, the Eads bats took a little while to warm up, but by the third inning they began to roll.  The rally started at the bottom of the order when Miranda Mitchek pulled a leadoff walk and then stole second base.  Blake Dickey followed suit and Eads had two aboard and no outs going to the top of the order.  Rhett Uhland was sitting in the one hole and loaded the bases with a third walk of the inning.  T.J. Conaway laid down a squeeze bunt that caught Mitchek leaving the bases again juiced.  Chance Fowler was hit by the pitch bringing home Dickey.  Jaxon Crawford then hit a single scoring Uhland.  Next came Trey McDowell who nailed a double scoring two more runs.  Conaway and Mitchek scored in the fourth inning to give Eads control, 6-0.  Eads then finished the game in the top of the fifth inning as they scored six more runs, again starting with Mitchek who arrived on an error.  Dickey was hit by the pitch and Uhland came through with a double scoring Mitchek.  Fowler then hit a second double putting runners on the corners.  Crawford arrived on an error that scored Dickey.  Zach Haase then slammed out a double followed by Wilson who duplicated Haase.

The team, as a whole, had 9 hits and 8 RBIs hitting at a .429 average.  The impressive team stat was the six doubles distributed by the Eagles.  Mitchek scored 2 runs, had one RBI, and a stolen base; Crawford had 1 hit, 2 RBI’s, and a stolen base; Fowler scored twice on 2 hits, 1 RBI, and 2 doubles.  Finally, McDowell contributed a run, 3 hits, 2 RBIs, and two doubles. 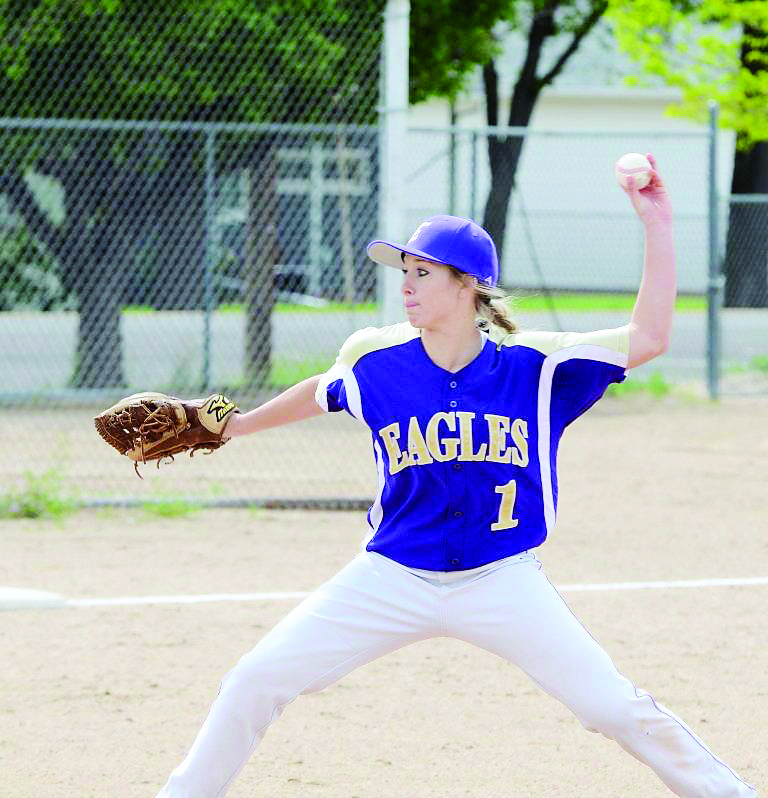 In the second game against Manzanola, a game that counted as a varsity contest on the Eads record, head coach Billy Koehler elected to go with Mitchek on the mound.  The sophomore had her debut a week before in Eads in a JV game.  Mitchek is a lefty who was also a varsity softball pitcher and centerfielder for Lamar during the fall season.  The baseball mound is quite a bit different than the softball mound, but Mitchek is beginning to adjust extremely well.  Against Manzy, Mitchek went two innings on the mound giving up just one hit, no earned runs, and striking out two batters.  One batter scored under Mitchek’s tutelage but the run was due to not one, but two errors from the Eads defense.  Crawford took the mound going into the third inning and would go three-up-three-down. But in the fourth inning the first two Manzy batters hit singles and Crawford then juiced the bases by hitting the next batter.  A key error at third base scored one and another single scored two more.  Crawford finally shut the Manzy bats down but three runs had come across.  At the end of the fourth inning, Manzy had challenged Eads, but still trailed, 7-4.

As Crawford held off the Manzy bats into the fifth with two strike outs and a fly out, the Eads bats got some final production with Haase starting the at-bat with a single.  Conaway arrived on an error at shortstop and Crawford scored both runs with a strong double.

The Eads batters hit at a .452 average with a 11 hits including two doubles.  Cameron Crow led the way in the middle part of the game as the senior scored one run on 3 hits, had one RBI and one stolen base.  Crawford continued to be an effective offensive player for Eads as the senior scored one run on 1 hit that scored 2 RBIs.  He would also have one stolen base.  Conaway scored twice on two hits, while Haase scored twice and had a double.
Although Eads easily controlled the Manzy group in the sweep, Coach Koehler was not happy with the numerous errors and miscues committed by his team.  He indicated that errors continue to plague the team and continue to hold the Eagles back from becoming a very tough team to beat. 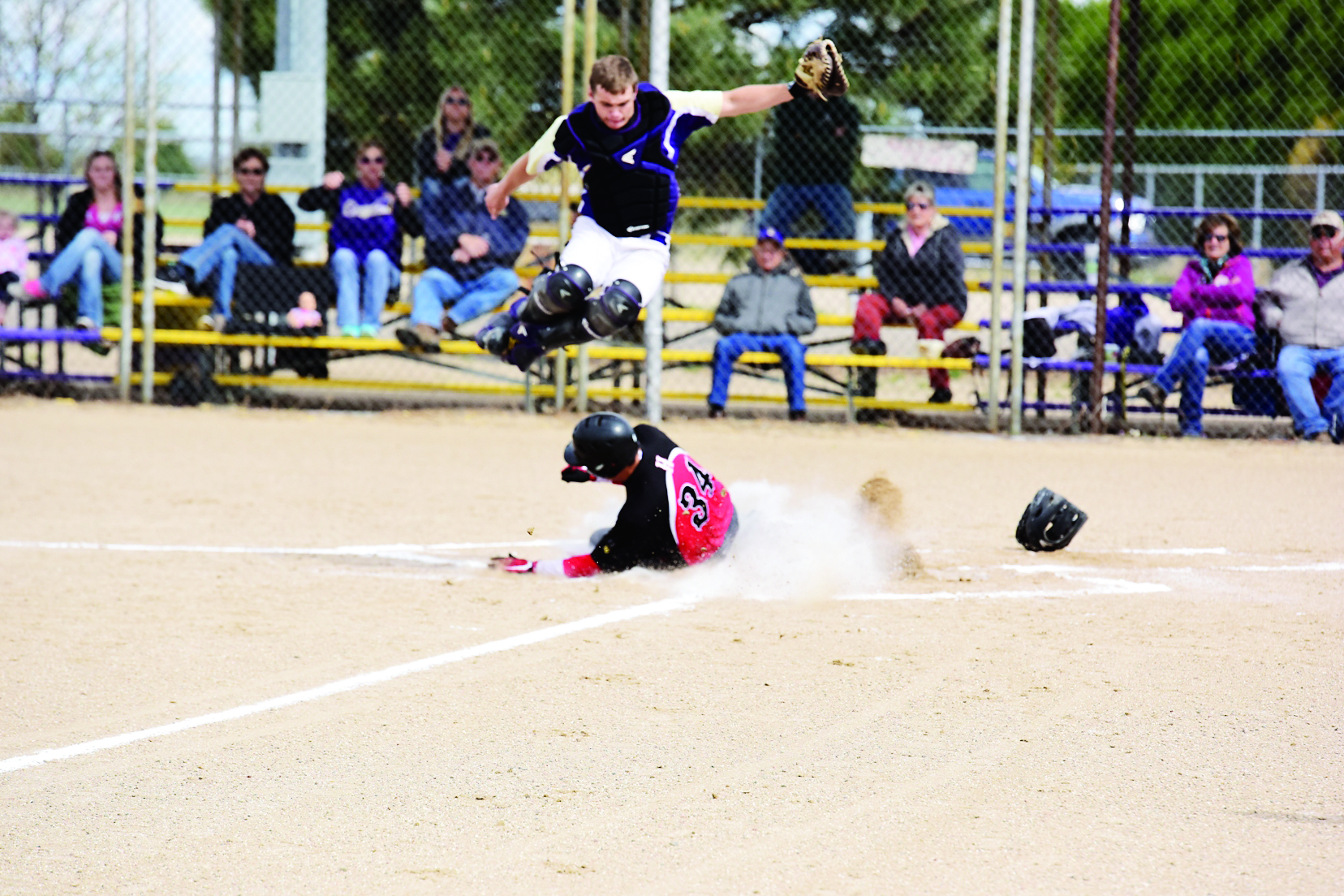 The Eagles hosted Holly on Friday for the conference championship as neither had been beaten in league.  Fans expected Eads and Holly to go nose-to-nose with both throwing their aces on the mound.  But Coach Koehler decided to throw a curve ball at the Wildcats right away and started Mitchek on the mound, instead.  Holly did go with their ace, senior Ricardo Juarez, for two innings.  Mitchek would take the loss for Eads, 11-8, after going two innings, but giving up five runs, only one earned, and striking out two.

The five runs for Holly came in the second inning and started with an error on the first batter.  The next batter hit an RBI double.  Holly then scored two more off of singles and then scored once more off an error from the shortstop.  Eads would get one run back in the bottom of the fourth inning when Crawford would get on with a single and Johnson would move him home off another single.  After four complete innings Eads trailed 5-1.

Uhland replaced Mitchek on the mound going into the top of third inning and put some impressive work in for three innings.  The senior lefty would hold the powerful Wildcats scoreless for three innings on only 1 hit.  While Uhland held Holly off, the Eads bats chipped away with two runs of their own.  Fowler would start off the fourth inning with a walk and would score on a Crawford RBI.  In the fifth, McDowell started the at-bat with a double and scored off a Haase sac fly.

With Holly leading 5-3, it would be Crawford on the mound for the Eagles starting in the fifth inning.  Unfortunately, errors continued to plague the Eagles as they gave up three runs in the top of the sixth and three more in the top of the seventh, all but two runs were unearned.  Eads trailed 11-3 going into their final at-bat, but put in a valiant effort scoring five runs.  Unfortunately, that was not enough to win the game.  Conaway walked to start the bottom of the seventh and then singles by Uhland, Crawford, Johnson, and Soliz scored five runs.  However, the bottom of the order struck out and that would determine the game.

Crawford had a strong game scoring 2 runs on 3 hits and 2 RBIs.  The senior also stole 3 bases.  Johnson scored once on 2 hits and had 3 RBIs.  The team hit at a .300 clip and left 9 runners on base.  Holly’s Brandon Wilson continues to be the top-gun for the Wildcats and this game was no exception as the senior scored 2 runs on 4 hits.  He would have 5 RBIs and three stolen bases.

Holly will enter the District Tournament at Las Animas on Friday as the top-seed and will get a bye through the first round.  They will then play the winner of Granada (#4) and Springfield (#5).  They will depend on Wilson who is currently carrying .656 batting average.  He has 21 hits and 17 RBIs.  Senior Yaniel Vidal is hitting a .625 average with 20 hits, 15 runs, and 10 RBIs.  Their ace on the mound is Juarez  with a 1.84 ERA and a 5-1 record. 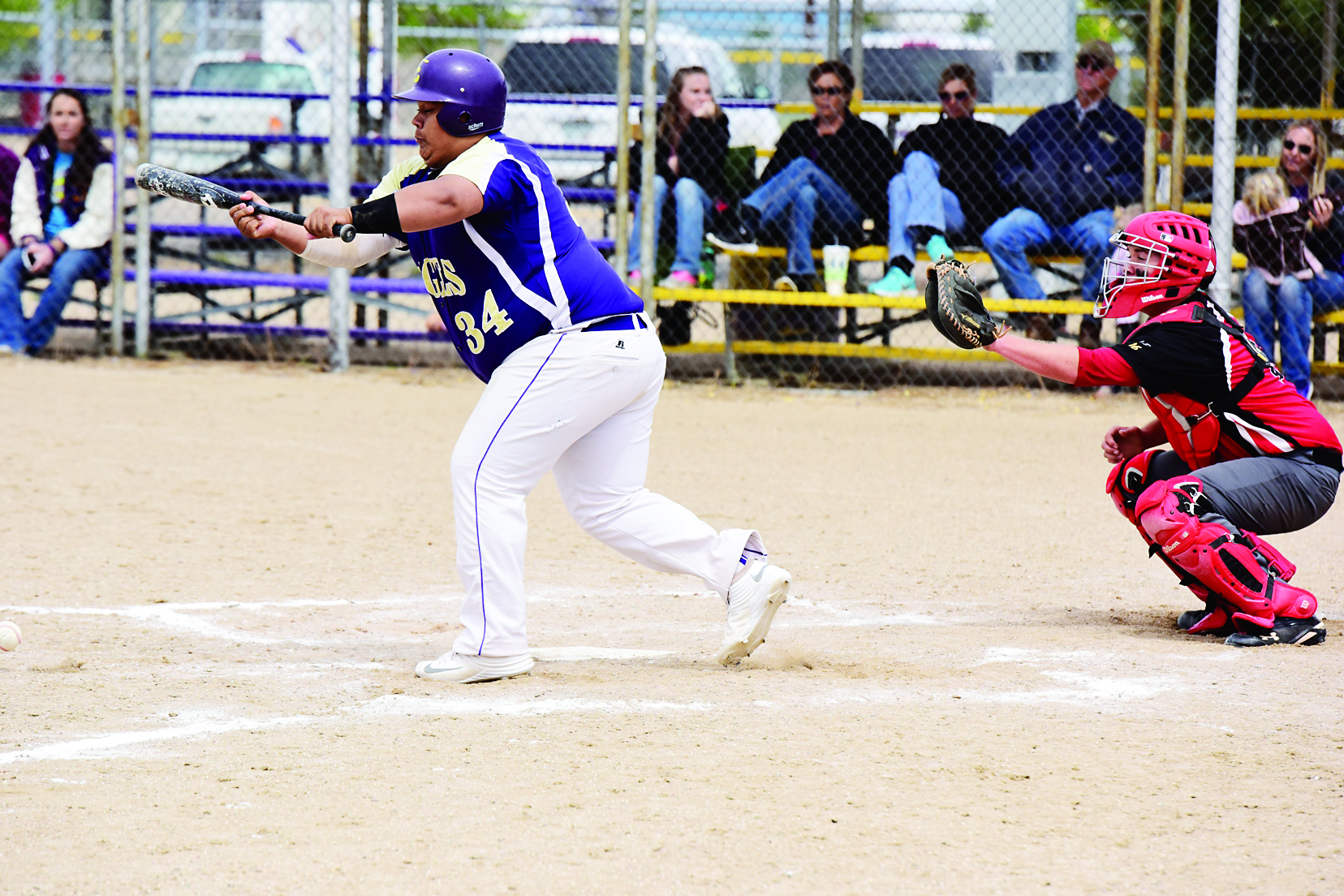 Last year Eads would lose in the final four to Holly, 15-4, to end their season.  Coach Koehler thinks this team is due and ready to play solid ball as the majority of the team are seniors.  A hot Granada (#4) team will take on Springfield (#5) on Tuesday at the Bobcat home field to see which team will advance to the district semifinals and finals on Friday in Las Animals.  The schedule for the district finals is as follows:  Holly (#1) vs Winner of Granada/Springfield game at 10:00 am; Eads (#2) vs Cheyenne Wells (#3) at 12:30 pm; and the two winners will play for the championship at approximately 3:00 pm.  Eads has to win the first game against the Tigers to advance on to Regionals.