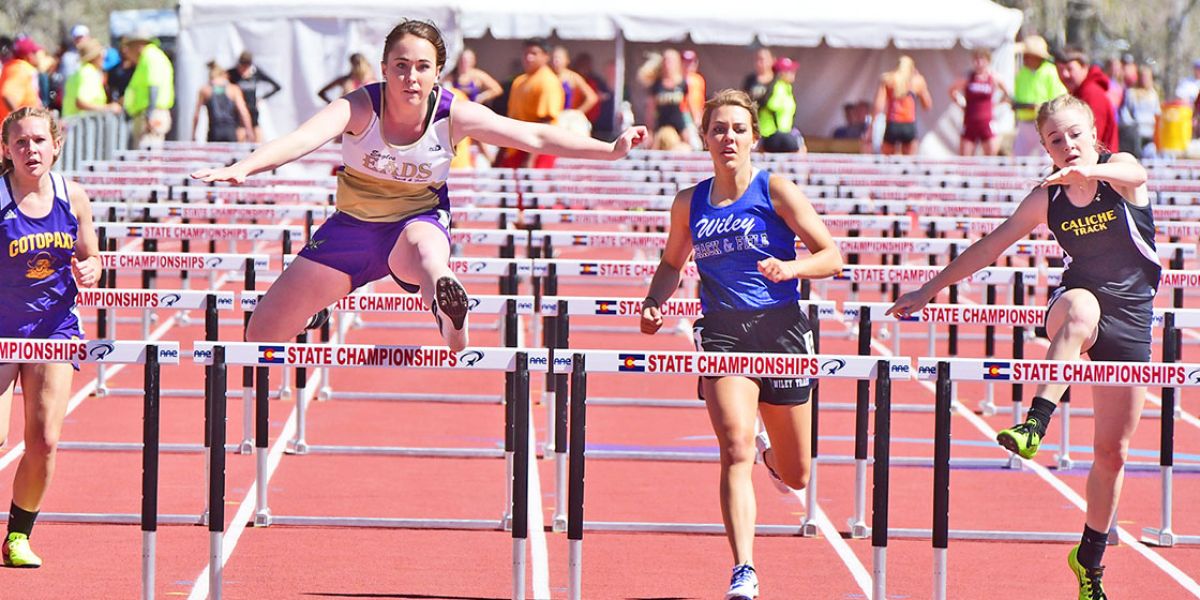 According to head coach Stephanie Bohlander the Eads girls performed pretty darn good at this, their first, state meet for many of the athletes.  However, this particular set of girls were far from happy with their results and are already hungry to go back to Denver to prove they have what it takes to become state champions.  Eads finished in 7th place out of a 40 team field just missing 6th by one point.  Not good enough if you ask them. 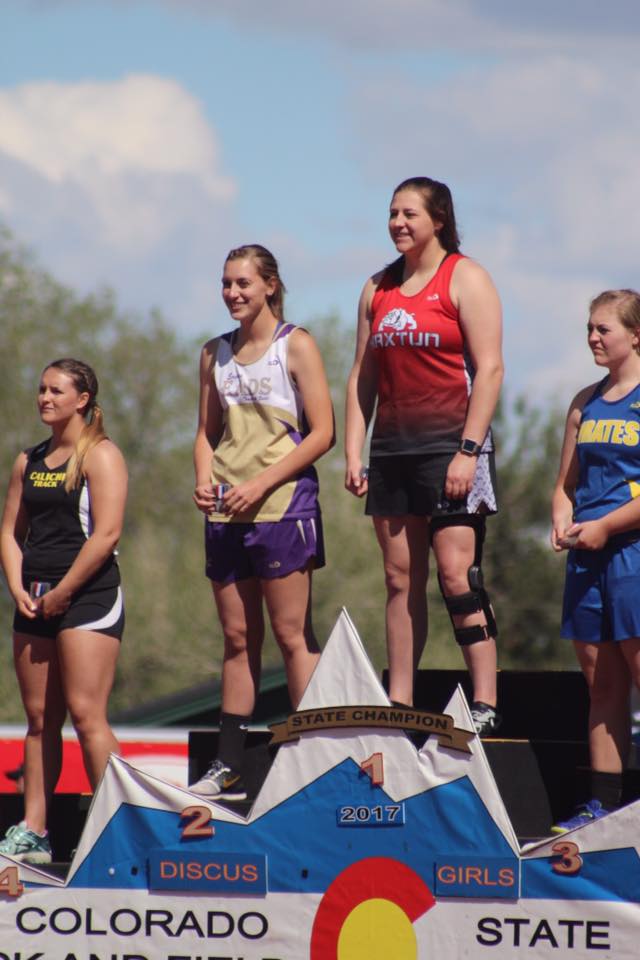 This year’s edition of the Colorado State Track & Field Championships was a drama-filled weekend of delays, bad weather conditions, and messed up plans.  The girls, as freshmen and sophomores, were not immune to the drama that swirled around them.  However, “This particular group of girls are competitors,” according to Bohlander, “and they were just right there making noise time after time.” They were scared, but they were fearless…..when it came down to it.  They were confused, but they were focused…when it came down to it.  “I couldn’t be more proud of this group of girls.”

Eads started out with high expectations on Saturday in their first event of the meet when they brought their 800M Sprint Medley team onto the track.  This team had just crushed the school record the week before and the team members of Brooklynn Jones, Miranda Mitchek, Kaycee Ellenberger, and Reagen Johnson were hoping for an even better time.  But, the girls quickly felt the pressure of the intensity of being in the limelight on a huge track with high expectations waiting.  They ran well, but not great, and you have to run great to become a champion.  Their time of 2:01.94 was not their best, but it got them a seventh place medal and a trip to the lower end of the podium.  It was a start.  However, Saturday was just not a day where everything clicked as the same girls, running in the 4x200M relay, ran well, but not their best, and again placed in 7th with a 1:54.45 time.  According to Bohlander, “They were incredibly disappointed.”

Saturday was still a pretty darn good day for the Eads field events as Mariah Smith put in some excellent work, ultimately earning the state runner-up silver medal with a discus throw of 119’ 11”.  Again, not her best, but a solid performance.  Throwing coach Trey Eder was proud of Smith’s performance, “Her form was excellent and she did everything we needed her to do.  It just so happened the top thrower hit an unusual prayer that beat us.”  He thinks the junior Smith will be spending a lot of time and energy in the weight room in the next year as the second place stung despite the fact she was a gamer throughout the season.  Bohlander indicated, “That’s what separates the champions from the rest.” 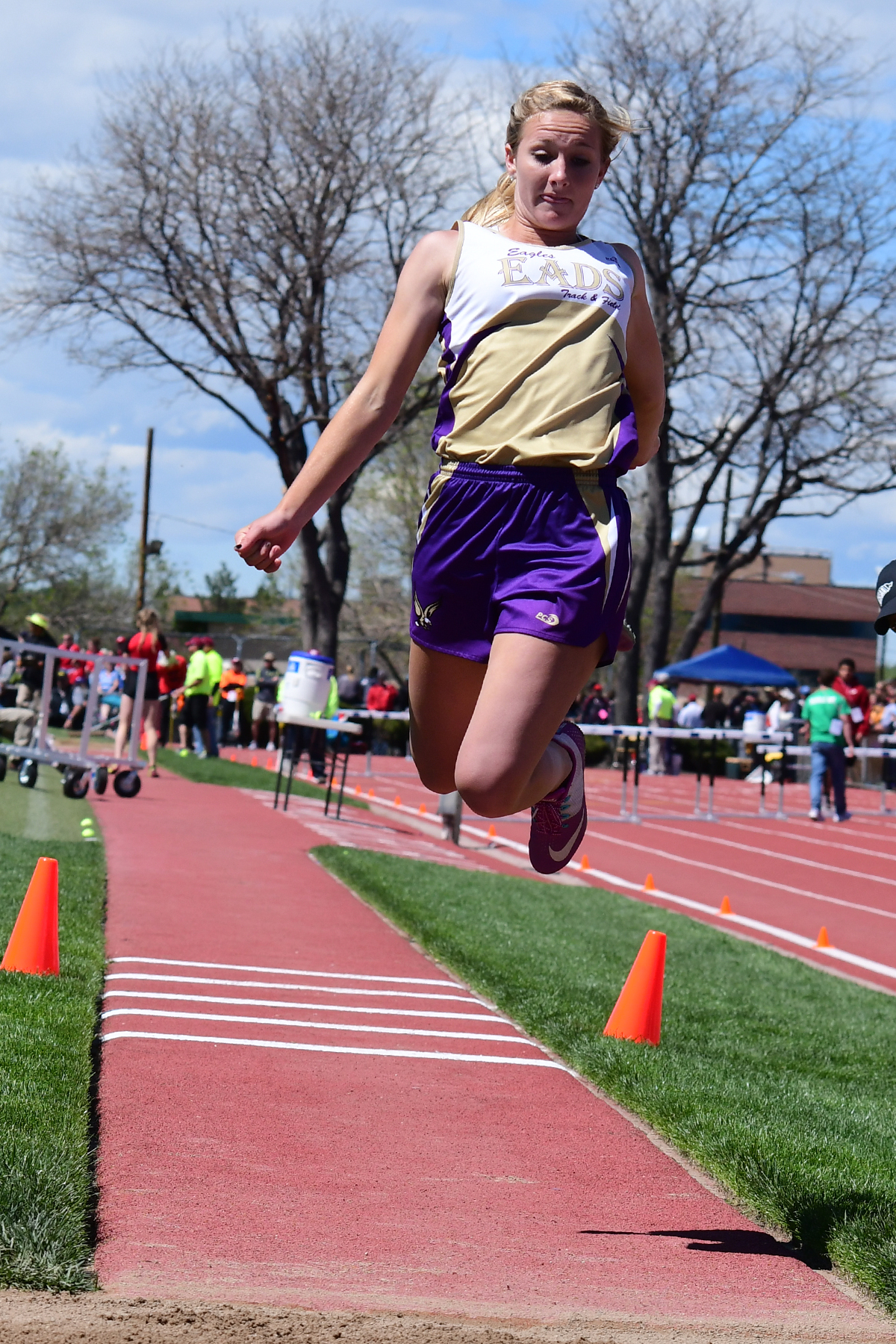 Mitchek and Kaylee Wilson, two sophomores, brought in some strong points in the triple jump to finish off a shaky Saturday at the state meet.  The two battled through four tough jumps with Mitchek, in particular, still struggling to find the board perfectly.  Wilson would nudge out Mitchek placing 4th with a jump of 32’ 1.75” while Mitchek came in 5th with a 32’ .75” effort.  Seeing the two sophomores on the podium representing a lot of future hardware was a nice sight for the two Eads coaches.

“We thought we’d had a terrible day but we were sitting in third place.  That surprised us, but it allowed us to come into Sunday in a more positive mindset.”

And Sunday was a good day for the Eads girls as they battled on the track and in the field to earn every precious point they could.  Jones’ 100M Hurdle race was one for the books as she and two Granada girls, Tarin Kemp and Kylee Holden, came down to the wire nose to nose.  When the photo finish results flashed on the big board Kemp had won the state championship in a time of 17.02, Holden was second with a 17.21, and Jones had to settle for third in a time of 17.22.  Jones PRd but lost the state championship by less than two tenths of a second.  Bohlander said Jones had struggled with not stuttering on her first hurdle all season.  On Sunday she stuttered but put in an amazing effort to get herself back in the race.  “I have never seen a kid go all out like Jonesy does.  At the wire she was leaning for everything she had and we actually thought, from our angle, that she had nosed Kemp and Holden out.”  She’s one heck of a kid. 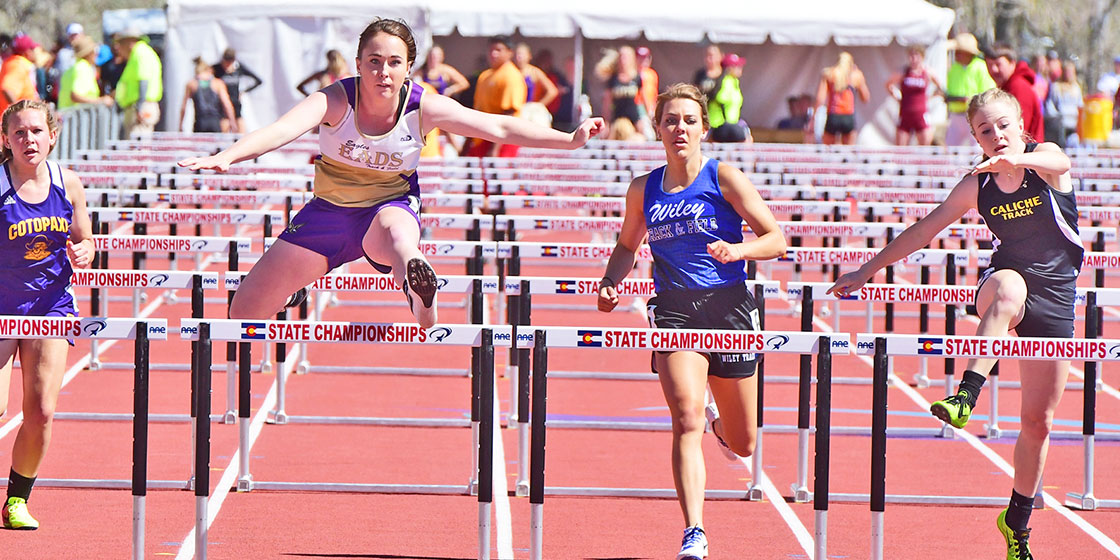 Another athlete that Bohlander was very pleased with was Wilson as the sophomore competed well in the 1600M, a race she qualified for last week--- in the very first time she ran it.  “How intimidating is it to be running in the mile, among the unbelievable field that was on the track with her?”  She ran two solid laps and was with the pack, but Bohlander said her third lap was a little soft.  However, on the fourth lap she all out sprinted the quarter and was just too gassed to finish in the fifth place position she found herself in with about 50 meters left.  She had to settle for 7th place in a time of 5:59.43.  Bohlander believes Wilson will be a contender next year if she gets in the gym and focuses on the strength needed to run the 1600.

Eads also filled all the relays and were really betting on their best team, the 4x100, to come through with some strong hardware.  However, their handoffs were shaky and individual times were not their best resulting in yet another 7th place finish in a time of 53.35; again, not their best.  Johnson, Mitchek, Ellenberger, and Jones were on that team.  The longer relays, the 4x400M and the 4x800M contained tough fields that were too much for Eads.  Wilson took a leg on both, despite already running a grueling mile.  It cost her, as the sophomore struggled to compete after only an hour of recovery time.  The 4x400 got a point coming in 9th place, while the 4x800M just missed that point they needed for their team coming in 10th place.

Other area competitors included Lydia Splitter from Plainview who tied for 8th in the high jump getting over 4’ 8”.  Bogenhagen came in 9th in the triple jump with a 31’ 0.75” jump.  Tess Hornung was a nice story in the shot put.  The sophomore had emerged from the masses to place high in the last two regular season meets.  In one throw, much better than her others, Hornung would place third at state with a 33’ 9.5” effort.

Coach Bohlander could not have been more proud of her girls.  She understands they were very inexperienced and intimidated at the big show.  However, she won’t lose one competitor off of this year’s team and says there are some 8th graders coming up that will make us even tougher.  “We’re going for it.  In the next 2 or 3 three years we have a really great chance of winning it all.”